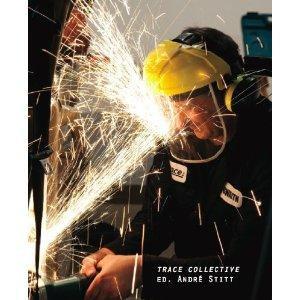 Andre Stitt
TRACE: Displaced
TRACE Collective was formed by director Andre Stitt in 2006, situated in the Trace Install-Action Artspace. They have since embarked on a series of projects involving full-size replications of their space in Cardiff – an installation displaced to locations around the world. This has resulted in performance art using reconstituted materials to incorporate experiences of displacement, memory and recall, while accumulating extensive archives of the process.

TRACE: Displaced, edited by Stitt, is a high-quality art book and the collaborators are respected experts in their field. It deals with the most recent work, and includes both critical essays and images. The book was launched as part of the Experimentica Performance Festival, which ran from 11-16th October 2011 at Chapter.

Huw David Jones reviewed TRACE: displaced  (edited by Andre Stitt) for Planet:
'Moira Place in Cardiff looks to the outside world like an ordinary terraced street. But behind the blue door of number 26 lies the TRACE gallery, which for over a decade has played host to a programme of innovative live performances and time-based work, often involving international artists. Run by the TRACE Collective, the gallery has gained a reputation as one of the UK's leading hubs for performance art.
The TRACE Collective's most recent project has involved creating a moveable 1:1 scale wooden replica of their gallery-cum-living room, in which to re-enact moments and materials of past performances in new locations around the world, forming a kind of living archive of the gallery's first ten years. [...] TRACE: displaced presents a record of these performances. Edited by Andre Stitt, director of the TRACE Collective, it includes critical essays by Marco Pustianaz, Eddie Ladd, Phil Babot and Blair French, along with a collection of colour photographs.
[...] The images certainly provide some sense of the work's visual impact. [...] Occasionally members of the audience can be glimpsed - sometimes looking engaged and thoughtful, other times looking bemused.'